Statistics Canada, in collaboration with CMHC today released estimates of core housing need based on the 2016 census data. 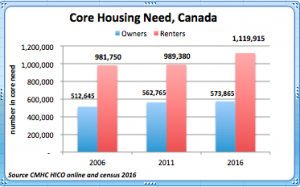 This is a timely release, coming on the cusp of the federal government’s release of the long awaited national housing strategy, anticipated to be announced next week . The new data reinforce the need to develop a comprehensive set of actions and investments to respond to this growing problem.

In presenting this data on their website, CMHC  highlight the right hand chart, which shows the incidence of core need, rather than the absolute number in need (as shown in left chart). This suggests that the situation is not as serious as that revealed using absolute counts: the overall incidence has remained relatively unchanged since 2006 (at 12.7%). And among renters it fell slightly from 27.2% to to 26.7%.

So what is really going on? Over the past decade, the overall population and number of households has increased, so the denominator is much larger. So this has diluted the impact of rising core need. A key trend over this period, was the decline in the homeownership rate from 69.0% (2011) to 67.8% (2016), so growth among owners was slower than that among renters.This reflects the constraint of high prices as well as policy changes that have limited access to new buyers. As moderate income renters have remained in the rental sector, they have swelled the total number of renter households and accordingly helped to lower the incidence of core need – and conceal the absolute increase, as noted above.

Core housing need, a measure developed by CMHC as a metric of housing problems. It assesses the number of households falling below one of three norm standards related to housing condition (adequacy), crowding (suitability) and affordability (paying over 30% of income). The measure also uses an income threshold to assess a household’s capacity to remove themselves from core need. The vast majority of core need (over 90%) is related to affordability problems.
Detailed tables are available here